“This is a record full of that space, steeped in the beauty of
North American music, true Americana…” 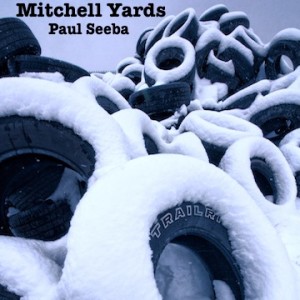 The music weaves narratives with plenty of local color to go around for those that hail from the Upper Midwest.  The cover of “Mitchell Yards” shows old tires that have been abandoned, yet become a thing of beauty when virgin snow is sprinkled upon them.  This image sets the tone for the album.  The music takes the forgotten and finds some salvage, recycling the forlorn into something new.

The title track is a good example of this idea.  A short walk in the woods, one would find the “Mitchell Yards” – as an old abandoned switching station outside of Hibbing, MN.  The yard was slated for the wrecking ball.  However, the train station was actually very critical in helping the Allies win WWII and has avoided being razed due to its cultural significance.  The song brings this history to life while remaining melodic and maintaining artistry.  On one level it is a story about a 9 year old kid, but it has a parallel meaning bringing a Northern narrative to light.

In fact, this song (with members of the group Mitchell Yards) will be featured in a video as part of PBS documentary about the historic site!

The video below is a small taste of the full documentary.